Assignment Snapshot: This post is an assignment for Social Media & News course for my Masters Degree program at the University of Florida. Below you will see the most shared media websites on Facebook and Twitter in January 2015 according to Newswhip. I am tasked with looking at relevant social media accounts and answering the following questions:  What accounts for the successes in shares? Are there similarities in the ways posts are created? What are the key differences? What can you learn from the market leaders which you will put into practice?

I’ve said it before and I’ll say it again. We like to watch. As a human race, we are curious, visual-oriented creatures stimulated by images, video or anything that taps into our inner voyeur.

Another thing we like?  *Me*  We like anything that tells me something about me. Engages me. Showcases me. If you think that is just a millennial thing…think again. We’re all narcissists which is why social media works!

Despite our narcissism, according to Forbes there is still a whole generation of us that wants to do good.  Let me act. Let me engage. Let me fight. Let me be a change agent.  Analyzing the social posts for the top two two sites in this data only reinforces all the above. 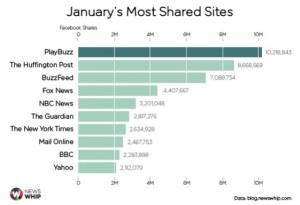 PlayBuzz has mastered the art of appealing to YOU! Just take a look at a handful of posts from this week:

As you can see the common thread is YOU. Not only do these posts tap your inner ego, they call you to action. The language is conversational, social, informal…and there’s eye candy to boot. PlayBuzz is pure fluff and I say that with no judgement. We all need a little mindless distraction and their numbers show, we aren’t alone. When it comes to what they do, they seem to only strike one note. Clearly that one note is a tune many want to hear though!

Huffington Post strikes a deeper chord but still manages to embody the key three things I mention above. Here’s a snap shot of some recent posts:

Police misconduct continues to rattle the United States from coast to coast. It resonates with many and Huff Po taps into that “Let me do something, let me be a change agent” aspect of social media that is so pervasive. Their language is a strong call to action and flat out states an opinion, “This is unacceptable.”

The “Lose Yourself” post is just a great example of viral video. In 3 hours, nearly 3500 shared this ASL interpreter bringing Eminem to a whole new level. (Who knew that was possible?)

Finally, you can’t go wrong with baby animals can you?  All three of these posts are different topics, different visuals and possess different tones. They all appeal to emotion though. They all seek to engage and connect with YOU.

BBC’s Twitter page is what I would call a parent tweet account. They essentially use it to Retweet the best of all BBC properties. Even in that, they manage to speak the right language and strike the right note. Take a look:

In this slide show, I captured the account’s first two tweets. Right off the bat, BBC didn’t miss a beat by capitalizing on conversational, every day tone: “Hello. Is this on? Brilliant. 1.4K shares worth of brilliant. Then they explain their accounts mission with Tweet #2. It would have been so easy to do that with Tweet #1. They didn’t. Stroke of genius.

The retweet of the BBC Radio scrabble piece continues to capture the vernacular and tone of the modern day tweeter. It presents a softer, funnier side of BBC letting its hair down. I mean come on! – When do you expect to hear the BBC saying ‘Fo shizzle!”  Stroke of genius part two.

Finally, the appeal to YOU and the use of video in the third tweet is yet another simple way to engage.

The New York Times proves you can be a top-notch news organization and still get your social on:

The “here’s what you need to know” concept to start your day is not a new one. You see it online, on TV and hear it on the radio. So what makes this tweet effective? I think it’s the photo. The Freedom Tower’s One World Observatory opened to the public today. The picture is slightly point of view and it’s a place that everyone has some connection to, even if you haven’t set foot in New York.

I grabbed the multi-tasking tweet because in and of itself, it’s nothing special. There is no visual. It doesn’t speak to YOU perse. I can’t help but read it though and in 40 minutes it received 44 retweets. Without directly using “you” in the language, the question appeals to the text and driver in all of us. It appeals to the professional in us that executes conference calls we do during the morning commute. I also think that it drives to a little core fear. I’m a mom. The last thing I want is some company saying it’s safe to multitask behind the wheel. Yep, New York Times– you got me. I’m clicking.

Finally, you had me at “a whole lot of crazy.”  Then you kept me for good with that UNREAL notebook picture. You spoke to me in a language I can hear and gave me something different to look at.

So what can be learned?

It’s really simple. Talk with your audience, not at them. Ask them to do something either for themselves or for another. If you can find that sweet spot that is all about me with a cause then you have struck gold. Make your people feel something. Give them something to dance to (Eminem), smile at (baby puppies) or get angry at (police misconduct). In other words: Move Me.

Oh…and include something for the eyes: an infographic, pretty art, a video or when all else fails… a selfie.