At the risk of sounding old, I took typing in high school. Yes, typing on an actual typewriter. There were computers but I went to an underfunded religious school so typing class was taught on this thing we call a typewriter.

I also remember walking in to my first television newsroom and seeing a teleprompter with a coiled roll of paper and a giant print press under it. We didn’t use it but the fact that it sat in a key position in the newsroom told me its days didn’t precede me by much.

Yep, that’s me. Courtesy of a really cool Google cam at ONA 2014 in Chicago

I’m fortunate enough to be in a prime spot in my career with a balance of just enough appreciation of where we came from and just enough understanding of where we are going. I’ve heard many colleagues refer to social media as the great disrupter in the newsroom. While that may be true, it still doesn’t change what my chief responsibility as journalist is. Tell you a story.

So about that great disruption? Here are 7 insights for survival:

I have a pretty obnoxious title: Sr. Managing Editor: Broadcast, Digital & Social. My job didn’t exist 6 months ago. It was proposed by me in collaboration with my employer Meredith Corporation, specifically the Atlanta CBS affiliate. They were looking for a traditional Managing Editor. The problem with that is local newsrooms need to take a page from the marketer’s notebook. We are in the business of content distribution. We must evolve beyond the broadcast box into multiple platforms and speak the native languages. Get on board or prepare to sink. I work in a market where the advertising dollar available to television stations is decent but completely hoarded by one dominant station. There are four TV stations in this media market. In 5 years, there will only be two…and this story will play out across markets nationwide. The key to those left standing? Become a brand, not just a place that does TV News.

See point 2. Read again. This goes hand in hand. It’s not just a pretty ring and a promise. To become a successful brand, you have to understand that being a slave to Nielsen overnight ratings is a thing of the past. Gone are the days when we told you what was going on and you passively listened. Yet we still program like this is the case. We have to be where the people are. In sickness and in health. For rich or for poor, ‘til the next evolution do we part.  I know when I woke up today, I was on Facebook on my phone before my feet hit the floor. I’m not alone.

Video. Video. Video. Sites that haven’t will soon redesign to become all video, all the time. Take a look at your Facebook or Twitter feed.  How far before you see a video? Instagram? Tumblr? Even Snapchat is completely built around a shared visual experience. We shoot video, we share video, we stream live video. Let’s face it people: We like to watch! Where there is demand, there will be a supply and the good news for the bean counters — it’s where the money is.

You think it’s all about me now? Just wait. It’s only going to be more about me. Why? Because I don’t need you. I already tailor my social feeds to the sources I want and I’m not born of the generation that only knows digital. I watch my toddler with my iPad and then watch her interact with the rest of the world. She gets pretty miffed when the PBS logo at the bottom of the television screen doesn’t respond to her touch. My point? We are looking at a generation coming up that gets what they want, when they want and how they want it. (Thank you Steve Jobs). Learn how to program the “me” channel now.

As we move forward at the speed of tweet, it is time to acknowledge the pending time of death on two journalism institutions.

I’m a Tom Brokaw kid. If you don’t know who that is, I don’t want to hear it. At one point, he signaled bed time and I would 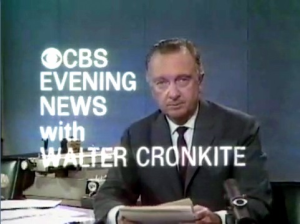 run and hide. Then he became a voice of comfort and authority in a changing and sometimes scary world. Why the world may still need the Tom Brokaws is another article altogether but the bottom line is…the anchor as we know it will soon be dead.

Frank Rich wrote a compelling piece for New York Magazine last month on what he dubbed an “inane institution”. In A Dumb job he writes, “No doubt some Americans of a certain age may still turn their lonely eyes to a patriarchal television anchor during a national disaster, but many more will be checking their phones.” By the time my 3 year-old is 10, the anchor will be nothing but a memory. Personality and emotional resonance replaces authority. People want and crave deeper relationship in an over-connected world and the person sitting on high, delivering information we already know is unnecessary and perhaps even insulting.

I’m calling it. By 2025, the network evening newscast will go the way of the typewriter, the evening

edition and that paper-filled teleprompter from my first newsroom: to a museum.

It can be summed up by something I heard just this evening while watching the NBA playoffs. LeBron James sealed the win on Game 3 for the Cleveland Cavaliers against the Atlanta Hawks. It was in overtime and the game was a battle. He fell to the floor as the buzzer blew. He stayed there on all fours. Exhausted. Emotionally spent. It was a sight to see. The old-school commentator said, “This will be a photo that will be all over the place in tomorrow morning’s news. I laughed and thought, “tomorrow morning? Try 5 minutes!” If there is no demand, there will be no supply. In short, there will be no demand for an evening newscast once a certain generation is gone. That time is coming. Coming fast.

NOW A WORD FROM OUR SPONSORS

At the end of the day, a good story is a good story. From hieroglyphics in caves to ink on paper to the printing press to radio to television, we are born to tell our stories. We all need our *once upon a time* to make us feel something.

I still have a typewriter. I also wear an Apple Watch and can tweet at the speed of light (ok, slight exaggeration). My point? It’s a journalist’s responsibility to appreciate where we’ve come from, to know where we are going, and to understand that in the end, it’s about the story. We just have to continue figuring out how to tell show it.